Home Humanity What Are Some of The Best Love Proposal Stories you Have?
HumanityLife Style

What Are Some of The Best Love Proposal Stories you Have? 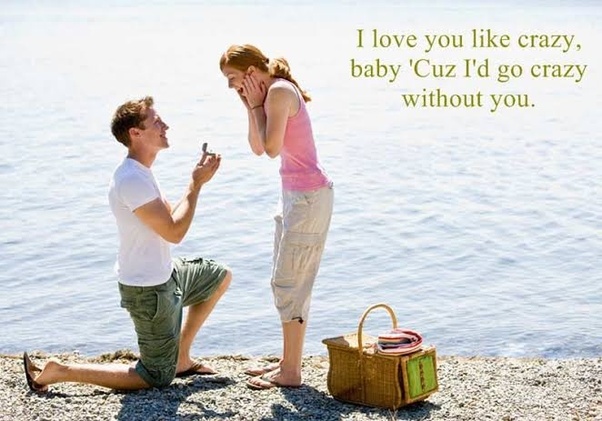 “I think we should get married!” I said, tearing a piece of Nan and dipping it into the gravy of butter chicken.

She continued to swoop in her noodles without even looking up. “Would you pass me some Szechuan sauce” she replied.

“Did you even hear what I just said?” I snapped, passing her the sauce.

“Yeah, sure let us finish our lunch first, and then we can get married.”

Her reply brought a smile on my face. Sarcasm and a strong craving for food – two of her strongest qualities that I was so fond of- depicted in a single reply.

I watched her engrossed in her lunch. We have always been big foodies. Our favorite pastime was trying out different restaurants for different cuisines. We ate till our stomachs could take in no more and our tummies ached when we walked. We were among those kinds of people that could give restaurants like Barbeque Nation or Sigree -that served unlimited buffet lunches or dinners- a run for their money. But it wasn’t just the food that brought us so close. Ever since the day I met her, I could feel there was some kind of special bond between us. We have been the best of friends ever since. We had stood by each other through thick and thin. Looking back at the memories of the times that we spent together always made me feel ecstatic. I spent almost two years working in a different city from hers, yet we were always connected throughout. Now that we were back in the same city, we didn’t miss out on any chance to go out together, have lunch, watch movies, etc. Sometimes, we would even go on excursions at the weekend. (Travelling was another common passion for both of us) Now that our parents were beginning to look for our respective life partners, I began to have this feeling that I have already found the person whom I wanted to spend the rest of my life with. I wasn’t very sure about her. What better way than by asking her directly. And that’s exactly what I did.

“I am not kidding” I exclaimed, trying to bring in a little sobriety in my tone.

“What makes you think I am!” she mocked, giving me one of her mischievous smiles. That smile. I could live all my life just looking at that impish smile of hers. Suddenly, in my mind, I was discovering new reasons to spend the rest of my life with her.

“Okay, then I guess I will have to inform my mother about this. She had been skeptical about us from the very beginning. Although, she found it hard to believe that someone as sensible and smart as you would end up with me.” I said, taking my cell phone out.

“Sure, Go ahead!” she thought I was still bluffing and this was one of my pranks.

I called my mother and put the phone on speaker mode. “Hello, son. Wassup!” my mother received the phone with her standard reply. “Mom, long story cut short – She agreed to my proposal. Didn’t I tell you she is as crazy as I am” I broke the news to my mother?

“Really!” my mother sounded as if Priyanka Chopra had accepted my proposal. “Well, at least you did one good thing in your life. Message me her parents’ contact so I can get in talks with them” she said with a sigh of relief.

“Sure mom, goodbye” I disconnected the call and looked at her stunned face.

“Please tell me this is one of your lame attempts of being THE PRANKSTER,” she said. The expressions of mischief now seemed to be fading away from her face.

“It’s not,” I said, looking directly into her eyes. “I am asking you to marry me”

“What happened to you all of a sudden? Is it one of the side effects of quitting smoking? If it is, then go have a smoke. But stop being out of your mind”

“You’re not asking me to smoke again, are you?” I said, raising my eyebrow “You’re the one who made me quit!”

“Well if I knew it would drive you to an all-new level of insanity I might not be that stern” she replied. I could now see her absorbing the fact that I was not kidding. “Anyway that is not the point here” she continued “forget what I just said. You’re not touching one of those again!” she said, pointing her index finger towards me. “The point here is…”

“I love you!” I interrupted her sentence midway and caused her to drop her jaws for a second. I had, in my life, watched numerous Hollywood romantic movies and had, in my mind, countless better ways of doing what I was doing right now. Somehow, I wasn’t surprised by the fact that I was screwing up this most important moment of my life so bad. Needless to point out that in the history of mankind this was the most horrible way in which any guy would have confessed his love for a girl.

The startled look on her face had returned and this time I could see a glimmer in her eyes too. I wasn’t sure whether I was headed on the right track. I thought of pulling off a Sherlock by holding her wrist (those of you have watched Sherlock would get it, and for the others, I would say go watch it first!) so that I could know if she reciprocated the same feelings, but the fact that I might get slapped in a public place, refrained me from doing so.

“You’re crazy!” she exclaimed. She was trying her best to conceal her smile. Her lips trembled as she spoke those words and she found herself at a loss of words. I took it as an ominous sign and made my move.

“It’s true” I took her hand in mine and continued “I know you think I am crazy. I think I am too. But I am crazy about YOU. I have cherished every single moment that I had spent with you. You’re the best person I have ever known in my entire life. When I am with you it seems like I am on a vacation, free from all my worries. Your smile had always been the solution to all my problems. I need you more than anyone else. Now and forever!” her hands were getting a little sweaty, indicating she was getting nervous. I could see her welling up. It seemed like we both have been expecting this moment to come up sooner or later.

“But I never thought you would be proposing me in such a weird way!” she spoke, almost reading my thoughts. “I feel so embarrassed right now. Just when I thought you couldn’t get any more annoying, you proved me wrong.” She slightly turned her head towards her left, showing a gesture of facing the people who were sitting with us.

Yes, just when you thought this proposal story couldn’t get any more tragic (for the girl, obviously) I would ask you to reconsider. Seated around us were a group of friends -Common old friends who didn’t have the faintest of the idea that anything of such sort could have happened between two of their friends. They were all looking at us with a stupefied look on their faces. All of a sudden, I realized that I have made things extremely awkward for everyone there. Now, I was beginning to get nervous, and I couldn’t help myself but smile. I looked at each one of my friends and smiled. They began to smile too. Sooner everyone was looking at each other and smiling. Then someone broke into a fit of laughter and the rest of them followed. Everyone had a hearty laugh. Everyone, but her! She was looking at me without blinking her eyes- a gaze that can’t be described in words. She did not have that waggish smile anymore. And that was the moment. I finally had “The moment” with her. It lasted for a whole five seconds.

We had our lunch and headed for our homes. I did not receive a formal answer to my proposal. We didn’t even talk about that after the hysterical group laugh. On my way back home, I received a text from her saying-

“Your mom is right. I am way too sensible and smart to end up with a jerk like you ;)”

Beneath the text was the contact number of her parents. I forwarded the message to my mother.

Keep Your Mind At Ease with A...